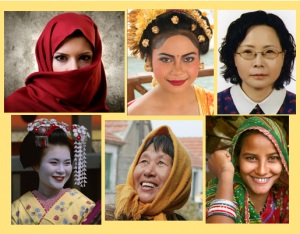 Is there a Pan-Asian Zeitgeist?

What makes Asia Asia? Is it simply a matter of geographic location? Is it related to cultural traditions, mores or habits? Is it about climate, language families or something else all together? And for that matter, is there anything we can point to that’s “Asian’ by nature? Is there a pan-Asian zeitgeist?

It’s a big World Out there Asoka!

Asia, (or more accurately, the continent occupying 4/5th of the landmass we call Eurasia) stretches from Turkey down through the Arabian Peninsula in the West, to the Pacific Ocean in the East; from the Arctic circle in the North, to almost the top of Australia in the South. As a continent it is the world’s biggest, with 17 million, 212 thousand square miles. And the population? Nearly 4 billion by some estimates.

Asia is made up of a highly diverse range of peoples, with a wide variety of customs, religions, preferences, cuisines and histories. But believe it or not, there are some distinct characteristics of ‘Asian-ness’ despite all these differences.

The distinctions below are admittedly generalizations, and there is some diversity between differing Asian peoples. But for the most part, if you keep these in mind when visiting an Asian nation or relating with Asian people, you’ll have all you need to become a gracious guest, colleague or potential business partner.

The single most important thing to understand about Asian peoples is the importance they place on what is called ‘face’. No, this isn’t about makeup, it’s about how one appears to the world. And when it comes to keeping good appearances, nothing is more important than ‘saving face’. This means that confrontation of any sort is a big-time ‘No-No’.

Of course, this by no means means that conflict and problems don’t arise. But public displays of them are anathema to Asian culture. In some countries, this can be taken to such an extreme that lives are put at risk, such as when a co-pilot will not challenge a pilot’s obvious mistaken calculations. But more often, it has to do with the way things do or don’t get done.

Having a problem with service at your hotel? Making a public stink about it at the front desk will only ensure things are about to get worse. Have an employee who needs reprimanding or ‘redirection’ of their duties? Confront them around their peers and you might find subtle little sabotages coming your way in the weeks ahead.

So when it comes to conflict, confrontation or poor service, it’s always best to keep a smile on your face, speak softly, address the issue in private if at all possible, and find creative ways to ‘generalize’ the problem and offer solutions, so that it appears no one is to ‘blame’.

I won’t put this delicately …. the left hand is for wiping poo. So whether you and your Asian friends use toilet paper or not these days, keep in mind that eating, handing things over with, receiving or pointing with the left hand is taboo. You’ll avoid this offensive faux pas simply – just keep your left hand to yourself.

For most Asian peoples, the top of the head is the ‘highest’ part of the body. It’s closest to God or Buddha or that which they most revere. Consequently, its opposite, the feet, are the lowest part of the body. This means that you want to pay careful attention to what your feet are doing.

In short, other than walking, standing and occasionally dancing, they shouldn’t do much else! No pointing with feet, please. And definitely never ever step over a person or a sacred object or food that may be on the ground.

If you are visiting a temple or shrine and directed to sit on the floor, you should tuck your feet under you. Never stretch then out, pointing toward the central altar or diety!

Family is very important to many Asian peoples – especially to those from the Far East. A child is a family’s insurance policy for old age. For most this is because the child(ren) – usually the son – will literally support them. Thus filial piety and loyalty are strongly engrained into even the most seeming modern young Asians. Returning home for festivals, holidays, marriages, funerals and sometimes even births are an expected part of proper family relations. And parents have a lot of say over their children’s lives – even into adulthood. This goes as far as making career and marriage decisions for children.

Despite the sometimes Medieval attitude toward homosexual relations taken in some Asian countries, same-gender hugging and hand-holding in public is common and totally acceptable. What’s not acceptable is opposite gender PDA (Public Displays of Affection).

Also keep in mind that boys are raised with a high level of respect for their mothers and aunties. This respect extends to other females as well. In countries where gender inequality is strongest, men do not approach women with physical contact, personal questions or impolite gestures. If you are a woman and visiting India, Pakistan or Indonesia, for example, and a man behaves this way toward you, you have every right to demand he go away, make a scene or otherwise get yourself out of the situation.

Your appearance matters. Unless you’re an uber-successful rock star, sporting faded jeans or unkempt hair to a social function is not acceptable. A suit for men and smart dress suit or pant suit for women is de riguer when doing business in most Asian countries. And showing excessive skin is tolerated but not necessarily appreciated in social settings. In other words, save the bikinis, short-shorts, tube tops and bare chests for beaches that cater to western tourists. They’re not welcome in small villages or on city streets – even in the hottest of climates. At temples, mosques, churches and many historic sites, you may also be required to cover shoulders and lower legs.

Children are beloved, indulged and given plenty of attention! What a western person might consider ‘spoiling’ is standard behavior in Asia. Letting your baby cry in public will be unacceptable in most of these countries. Don’t be surprised if strangers intervene by distracting your child or feeding her sweets without asking your permission.

These are just a few of the most important distinction of Asian culture. In my experience throughout the region, I’ve found people to be gracious and welcoming most of the time. Unfortunately, I’ve also seen many a tourist behaving as if they were in their own country.

To say they were acting with total disregard for their host country’s values would be an overstatement. Often, these tourists haven’t even bothered to learn the most basic etiquette. This is truly unfortunate, because when we travel, we become ambassadors of our own country. And when we show up acting in complete ignorance of the values and standards of another land, we lose face for ourselves, our hosts and our own people.

So please, please, if you gain anything at all from this post, let it be that when you travel or do business with Asia, learn something about the Do’s and Don’ts of the people before your very first “Hello.”

3 comments for “7 Distinctions of Asian Culture”